It's easy to own and feed Melanurus Wrasse fish. Find out how now!
We love you Mom!! Join our FREE Facebook Group Here

Our beautiful planet’s waters are full of eye-catching species of fish that many aquarium enthusiasts want to collect. One of the safest ones to add to your fish tank is the Melanurus Wrasse, a boldly colored little swimmer, native to the waters of the Pacific Ocean.  Not only is it exotically unique, but it is also easy to care for.  Of course, before adding one or more to your aquarium, it’s important to know how to feed melanurus wrasse.  While the little guy really is unpretentious, there are certain things you will need to keep in mind if you want to ensure that it stays happy and healthy.  Here is what you need to know about exotic pet fish like the Melanurus Wrasse. 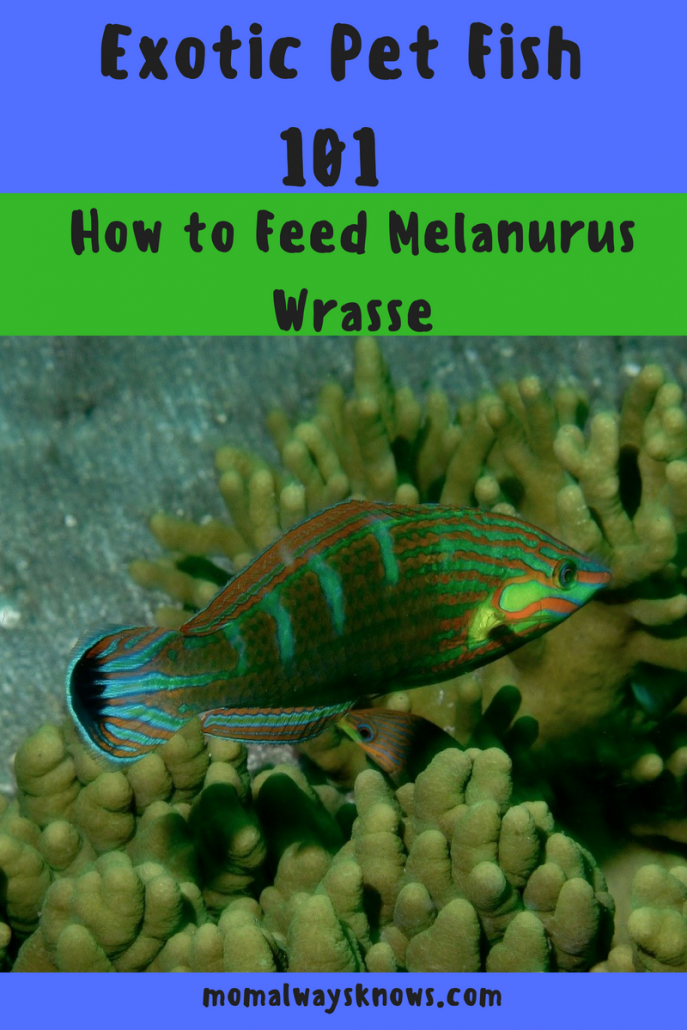 The melanurus wrasse is a small Indo-Pacific species of exotic fish known in the scientific community as the Halichoeres melanurus. It bears different names, such as tail-spot wrasse, pinstriped wrasse, Hoeven’s wrasse, three-eyed wrasse, or yellow-tailed wrasse. In the western region of the ocean, it can be found from Japan to Samoa and back.

Going down south, the Melanurus Wrasse swims as far as the Great Barrier Reef of Australia. It prefers shallow waters of a maximum of 15 meters in depth, as it is a small fish of just 12 centimeters,  that enjoys the warmth and sunlight. The male of the species is a lot brighter in color than the females and its patterns intensify tremendously in their presence.

The body of the adult Melanurus Wrasse is bluish-green  and it is lined with stunningly intense salmon pink stripes that reflect orange. Its scales look amazing when they catch the light as they swim around. Still, unless the mating season is at the door, telling the difference between the two genders of the species can be tricky by looking at just colors alone.  Fortunately, there is one main difference between male Wrasse and female Wrasse that helps identify the gender of the fish besides the vivacity of the hues. Females have eyespots, also known as ocelli markings, on the caudal and dorsal fins.  So, if you spot one of the little swimmers and want to know if it’s a boy or a girl, look there first.

The Melanurus Wrasse is a popular species in the aquarium trade.  It is protected by vehement important and export laws, which means that it is not endangered. This earned it the status of ‘least concern’ as it is a widespread fish that is in no danger of becoming extinct any time soon.

The Melanurus wrasse is great for aquarium pest control because they eat just about anything, including Monti nudi infestations. They create a clean and sustainable environment for their tank mates as well and are also incredibly easy to care for.

The only minor nuisance about owning a school of them is that they are notorious jumpers.  Keep your fish tank lid on at all times, otherwise you will come home to find them dead on the floor.  Come feeding time the little guys aren’t picky eaters at all as they adapt to anything you are feeding their tankmates, such as fish flakes or mysis.

If you have a few Wrasses and other Butterflyfish in the tank you can also turn feeding time into a fun show for the whole family. Just crack open a clam and throw it in there and let the feeding frenzy begin. They will tear it apart in a matter of minutes, which is quite exciting to watch. Still, be careful to rinse the inside of the shell thoroughly before it reaches the water.

This is proper fish tank hygiene, and it is essential for the health and well-being of every single fish in there.  Even though they are not hard to look after at all,  theywill still benefit from a clean environment that is properly maintained. Clean the aquarium regularly and change the water monthly so that you extend their lifespan to the maximum.

The Dreaded Housework (and how to get the kids involved!)

My life! Dad got to have 2 dates for the dance! Lo