A bridal shower provides the perfect opportunity for the bride‘s friends and family to come together, get to know each other and celebrate before the big day. The tradition of the bridal shower dates back centuries to the days when the bride‘s family would provide a dowry to her new husband. However, if a woman chose an inappropriate suitor, her family would refuse to put up a dowry. Friends of the couple would then come together to help make up for this lack of dowry by giving gifts and donating things to help them to set up their home. Bridal Showers today are quite different!  Check out our Event Planning 101 on Bridal Showers below! 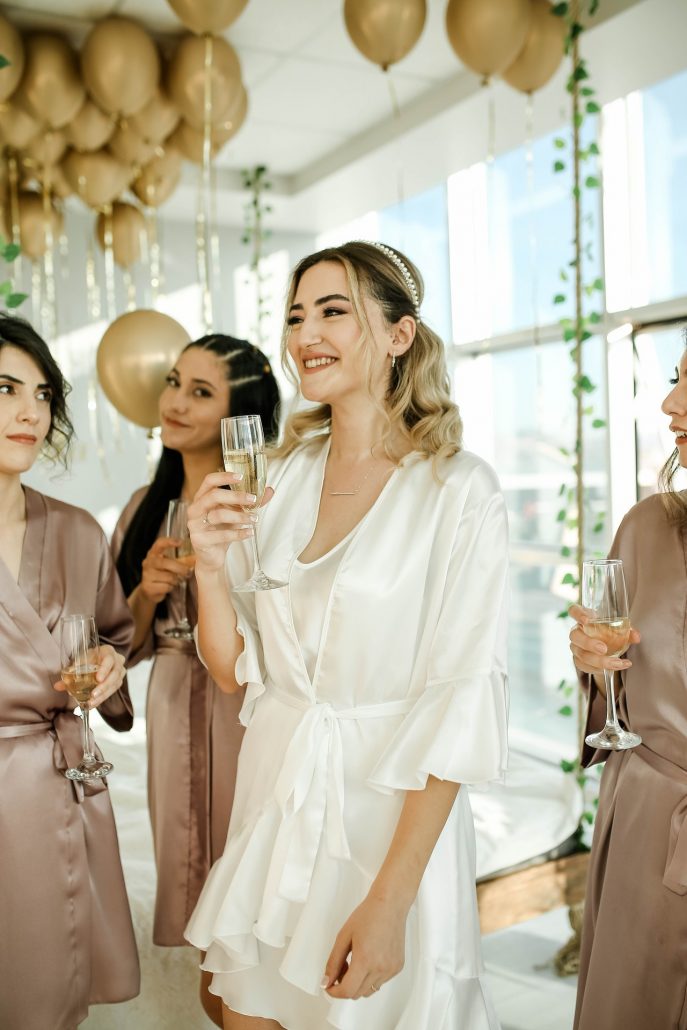 Who Throws the Shower?

Most of the time the maid of honor takes on the responsibility of hosting the bridal shower. However, unless you are planning on throwing a surprise bridal shower, it is perfectly okay to ask for the bride‘s input. For example, she might want to create a registry to ensure that she gets the gifts that she wants. She may also have a guest list in mind or a theme she prefers.

For an informal or smaller bridal shower, the host usually picks up the tab. However, if the brides‘ tastes are a little more expensive, you can always split the cost of the shower between a few of you. Or, if appropriate, the expense might be shared between all the guests. Consider this when planning the shower.

Where to Hold the Shower?

This depends entirely on the bride and her interests. You can make almost any location work. That being said, traditionally, bridal showers are held in the host‘s home. However, this is not always realistic. Have a discussion or a brainstorming session with the bride to see what she‘d prefer. Great spots include a restaurant, bar, or any local venue. Perhaps the bride would enjoy an activity? Her bridal shower could be hosted at a spa or a pottery studio. The possibilities are endless as many places are willing to host a group of people!

When to Hold the Shower?

This again relies entirely on the bride and your preferences. A bridal shower can be held anytime before the wedding, though most tend to fall between six months and a week before. Think about the guest list; if a lot of them are going to have to travel for it, then it would make more sense to hold it near the wedding so that they can attend. Otherwise, two months to a month before is probably the best option. You don‘t want to stress the bride out and put too much on her plate just before the wedding.

The time of day is also entirely up to you and the bride too, again it depends on what your plans are. You could host it at brunch or in the early afternoon; it could also be held in the evening too. Think about what activities you are going to do and how long you think the party is going to last. If it is going to last for hours, then holding it earlier in the day might make more sense. You should also consider who you‘re inviting; the bride‘s elderly grandma probably won‘t want to come to a bridal shower that‘s going to go on into the night.

This, again, will largely depend on what you have planned and whether you are following a traditional itinerary or not. If your shower centers around an activity like painting pots, wine tasting, or a spa day, then you obviously will have to plan around those. Otherwise, most showers tend to pass by with food, drinks, the opening gifts, and swapping embarrassing or funny stories about the bride. There are a few games that you can play, but these tend to be a little on the risqué side and might not be appropriate for older guests. You might also want to come up with a playlist; this can be a chill background mix or made up of the bride‘s favorite tunes to encourage everyone to get up and have a dance.

Most bridal showers tend to send guests off with some party favors, be they big or small. This is something that you will need to factor into the budget. It could simply be some of the food leftovers and a small bottle of bubbly. That being said, you shouldn‘t feel pressured into providing party favors, have a discussion with the bride to work out what option would be best. It is also traditional to send thank you cards to the guests. Keep the presents with the tags if you want to offer a more personalized card; if not, a generic one will do. Check out these bridal shower thank you cards from Greenvelope; they have a huge range as well as some advice on what you should include in them.

First things first, you shouldn’t really invite anyone to the bridal shower if they aren’t also invited to the wedding. This is why you should run the guest list by the bride or ask her to provide you with one. If you are planning to throw the shower as a surprise for the bride, you could ask her fiancé or her mother. Obviously, you should invite all close female friends and relatives of both the bride and groom or – bride and bride, as the case may be. Bridal showers have always been traditionally attended exclusively by women, but this is not necessarily the case anymore. It is all about inviting the people that the bride would want there. Some couples throw coed events or ‘jack and jill’ showers for both the bride and groom. Discuss this with both the bride and the groom to see what they are comfortable with.

Bridal showers are an age-old tradition; they are a great way for the bridal party to get to know each other before the big day, as well as all of the influential women in the bride’s life. Not to mention the fact that a bridal shower allows the bride to let her hair down and have a break from the stress of planning a wedding.

« Living In Singapore: 7 Tips To Make Your Move Easier
11 Things to Do Before Selling Your Home »

momalwaysknows.comJanuary 27, 2023 3:55pm
Where are you in the journey? Sometimes I am leaping but other times I find myself taking flight! ❤️
#takeflight #flyhigh #morethanmama

Where are you in the journey? Sometimes I am leap

You got this Mom!
#wednesdayvibes #Wednesday #moth

Where are you in the journey? Sometimes I am leap